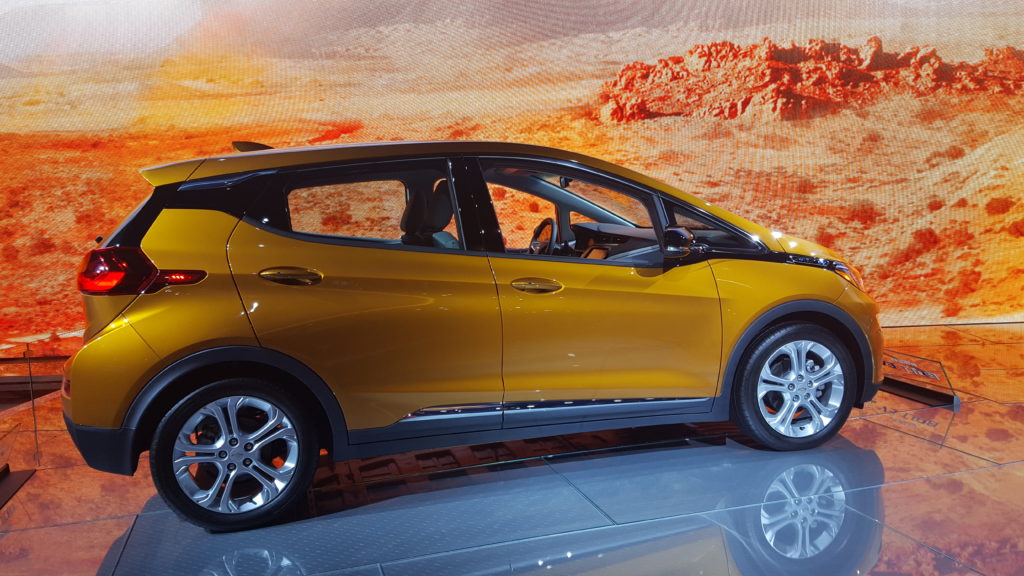 We at CCA like clean air innovations better than the next guy. When we were invited by the California Electric Transportation Coalition (CalETC) to attend the Los Angeles Auto Show for a briefing on electric vehicles and to get a tour of the show’s EVs, we didn’t think twice. After all, EVs have some cutting-edge technology under the hood. Why are electric vehicles special? They have no tailpipe emissions, so they are not spewing toxic pollutants into the air. They are also cheaper to drive than regular gasoline cars because electricity costs less than gasoline, which as we all know has fluctuating prices. Maintenance costs for EVs are also less, e.g. no oil changes to worry about. The battery technology is also getting better every year, which means that you can drive more miles on a single charge.

When we arrived at the LA Auto Show, we started our visit by attending the CalETC briefing, which featured industry experts and advocates for transportation electrification. One of the panelists, an EV industry writer and advocate, suggested that a big marketing problem currently affecting the purchase of EVs is that driving is framed as a charging experience. For example, focusing on how fast you can charge your car using a DC fast charger at home instead of a wall outlet. The panelist stressed that auto manufacturers should emphasize that the consumer will live their life and go on about their day (or night) while charging is happening on the background.

A panelist with Consumers Union emphasized that more education is needed about what incentives and programs are already out there. Another industry expert agreed with this assessment because the current car buying experience for EVs is generally one-sided. Drivers go into a dealership knowing what they want, whereas the salesperson often does not know much about the EV technology or the existing state and federal incentives to purchase EVs. Not only should training be increased, but one of the panelists also suggested that one way for salespeople to get acquainted with the technology is to drive EVs themselves. We agree with this suggestion because in our experience everyone who drives electric cars loves them. Another topic that was raised during the briefing was the need for broad based infrastructure investment because increasing the numbers of public charging stations will assuage range anxiety, thus motivating more people to purchase EVs. More charging stations means that there will be fewer people worrying about their car’s battery running low because there will be more places available to charge them.

A closing thought at the briefing was the need for the automakers to provide more product variety in the car models they are developing. During the tour of the EVs at the auto show, we were excited to see more model varieties slated to come by the end of 2016 and in the upcoming years that will fit different driving styles and needs. For example, Chrysler is releasing their Pacifica model, the nation’s first ever plug-in hybrid electric minivan. This is huge news for large families that not only want to fit all their family members in one car, but also want to do their part to help clean up the air. Mitsubishi is also planning to release their Outlander plug-in electric family friendly SUV sometime in the next year. All these great electric vehicles are coming down the pipeline, but we need a lot more of them on the road in order for them to make a dent in helping clean up the air. This is why together with our partners at NRDC, Environment CA, Communities for a Better Environment and the Greenlining Institute, CCA is working on the Charge Ahead California campaign to deploy over 1 million electric vehicles on our state’s roads by 2023. This will help California meet its zero emission vehicle goals and also create economies of scale that will help with the adoption of these cars by everyone, including low and moderate-income drivers.

In order to help achieve this, we are working to ensure that funding from the state’s climate investments goes towards increasing access to EVs in disadvantaged communities through the continuation of equity programs, such as scrap-and-replace vouchers enabling drivers to trade in their old clunkers for electric vehicles. We will continue to work on these trailblazing programs to ensure that zero emission technology becomes the norm on our roads.