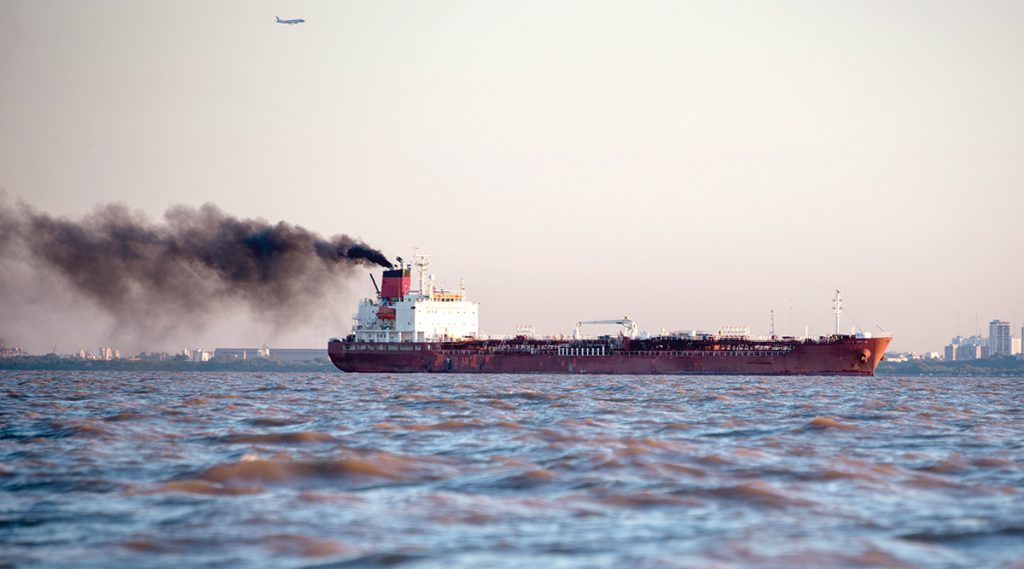 !
December 2019 Update: Thanks to your calls, comments and advocacy, CARB moved forward to begin the process of adopting a tougher regulation!

When it comes to air pollution, there’s nothing quite like container ships. These giant football-stadium size vessels are a major source of air pollution globally thanks to their frequent use of a thick, sulfur-laden “bunker” fuel made from the dregs of the refining process. Emissions from these ships are especially harmful to human health in Port communities throughout California.

The good news is that the technology exists today to do something about it. If adopted, these technologies would be the equivalent of taking 7,000 vehicle trips off the road and create health benefits estimated at $2.6 billion dollars.

Today we are asking you to ask the California Air Resources Board to adopt a tougher at At-Berth regulation. Details follow.

CARB has proposed to update a regulation requiring ports operating statewide to reduce the worst air pollution emissions from ocean-going vessels (OGVs) while in dock. These vessels typically derive power from heavily polluting diesel fuel auxiliary engines when in port. By creating and enforcing a stronger regulation that will require all vessels to either plug-in to cleaner electrical grid power or capture and treat emissions, CARB will dramatically reduce OGV emissions while in dock and the level of toxic air pollutant exposure for those living near and working at ports. This issue of “cold-ironing” or “shore-side power” for OGVs is one that residents and environmental advocates have been championing for more than two decades.

What is the purpose of the At-Berth Regulation?

The purpose of the Proposed CARB At-Berth Regulation is to improve upon its existing 2007 regulation and reduce emissions from diesel auxiliary engines from OGVs such as container ships, passenger ships (or cruise ships), and refrigerated-cargo ships while berthing at a California port. The new, proposed At-Berth Regulation includes the California ports of Los Angeles, Long Beach, Oakland, San Diego, San Francisco, and Hueneme.

What does the At-Berth Regulation require?

The At-Berth Regulation provides vessel fleet operators visiting these ports two options to reduce at-berth emissions from auxiliary engines: 1) turn off auxiliary engines and connect the vessel to some other source of power, most likely electric grid-based shore power; or 2) use alternative control technology that achieve equivalent emission reductions.  The regulation will go into effect in phases:

What are the benefits of the At-Berth Regulation?

The requirements of the Proposed At-Berth Regulation will help the State of California meet its Clean Air Act requirements, especially as cargo is estimated to increase by 50 percent by 2032. In addition, CARB estimates the regulation will reduce greenhouse gas emissions by an average of 33,000 metric tons annually, or the equivalent of about 7,000 passenger vehicles. Most importantly, the proposed regulation will result in approximately 23 annually avoided cases of cardiopulmonary mortality, as well as lower health costs statewide from lower particular emissions. Over time, the health benefits of the proposed regulation are estimated to be worth $2.64 billion, in the form of localized reductions in cancer and decreases in incidence of cardiopulmonary hospitalizations and emergency room visits. (The Department of Finance approved these benefit calculations during the summer of 2019, submitted by ARB August 1, 2019.)

What are the real costs of the At-Berth Regulation?

CARB calculates that all infrastructure, administrative and other costs to the ports and the vessel operators add up to $2.35 billion through 2032. Costs to the average California consumer would be the equivalent of (a) adding $8 per 20-foot equivalent unit (TEU) container, (b) $5 per cruise ship passenger, (c) $7.50 per vehicle on a roll on-roll off vessel, and (d) less than 1 cent per gallon of gas.

What can you do to help the At-Berth Regulation succeed?

1) Write a letter of support for the proposed At-Berth Regulation on or before December 9, 2019. Details of the regulation and submission instructions can be found here.

Write a letter of support

In letters of support, we encourage you to emphasize the importance of this proposed regulation for public health improvement and also raise the concern that it will take the longest for oil tankers to comply (up to 2029). We want to ask the board to NOT agree to any further delays of implementation of the proposed regulation – we want to see the regulation applied to all OGVs as soon as possible.

2) Appear in-person, and encourage partners and allies to appear, at the vote of the Board to speak in favor when it considers and votes upon the proposed draft At-Berth regulation Thursday, Dec. 5th, in Oakland, at the De Fremery Park Recreation Center, 1651 Adeline Street, 94607. This is the first vote of the Board on this regulation; the second vote will be after the California Environmental Quality Act analysis of the regulation, around May 2020.

Overall, it is difficult to find opportunities to reduce pollution from internationally traveling ocean going vessels, due to their being under international jurisdiction. The Coalition for Clean Air wants the proposed regulation to be implemented as soon as possible and is against any further extensions of time. The topic of this regulation has been discussed for decades and cannot be delayed further, for the benefit of our health.