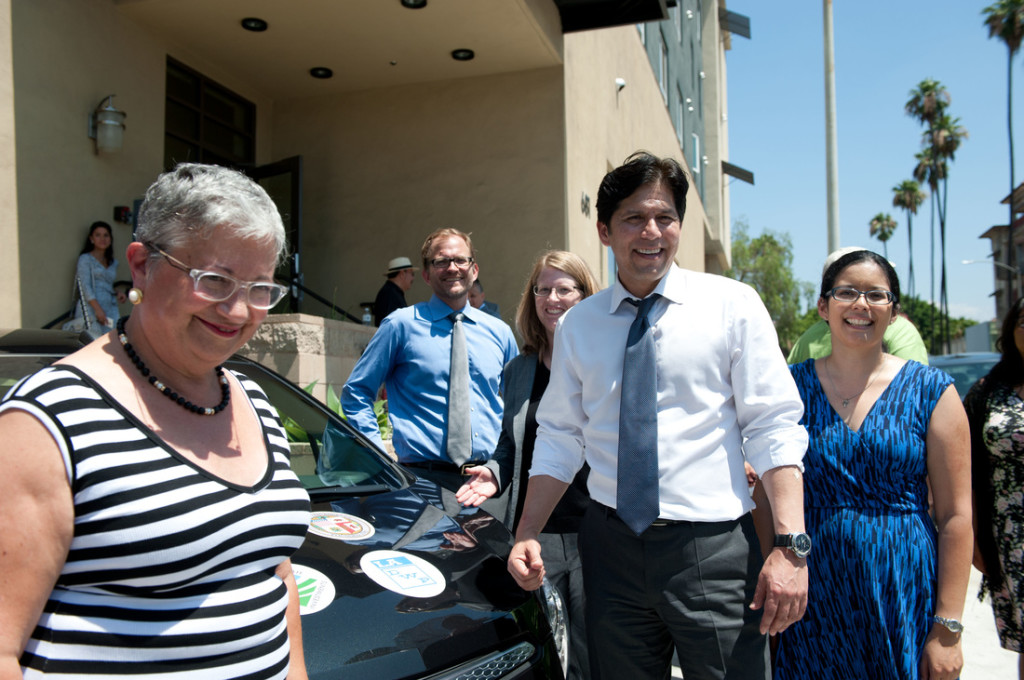 The California Air Resources Board (ARB) has offered $1.6 million to the City of Los Angeles to set up a pilot carsharing program for electric vehicles in disadvantaged communities. The grant will fulfill a key mandate of SB 1275, the Charge Ahead California Initiative, enacted last year to make clean transportation more widely available, particularly in low and moderate-income neighborhoods. The pilot is a significant step toward ensuring that Californians of all income levels benefit from the state’s effort to clean the air, reduce our dependence on petroleum, and combat climate change.

The funding was announced on Friday, June 24th, at an event held at an affordable housing complex in the MacArthur Park neighborhood of Los Angeles, one of the neighborhoods that will be served by the pilot program, which aims to serve 7,000 residents in disadvantaged communities. Senate President pro Tempore Kevin de León, who authored SB 1275, California Air Resources Board Chair Mary Nichols, and City of Los Angeles Chief Sustainability Officer Matt Petersen were among the speakers at the press event. CCA’s Fabiola Lao, who along with other non-profit organizations and community groups worked with the L.A. Mayor’s Office of Sustainability on the grant proposal, was also in attendance.

The funding for the project comes from polluter fees collected under the state’s climate change law, AB 32. A second law, SB 535 (De León), mandates that one quarter of these funds go to projects that benefit disadvantaged communities in highly polluted areas.

The Charge Ahead California campaign, which worked with Sen. de León to pass SB 1275, is led jointly by the Coalition for Clean Air along with Communities for a Better Environment, the Natural Resources Defense Council, Environment California, and The Greenlining Institute. CCA is also a leader of the SB 535 Coalition, which seeks effective implementation of SB 535.

Disadvantaged and low-income communities are disproportionately burdened by air pollution and a myriad of health impacts. The electric carsharing pilot project in Los Angeles will increase access for these communities to zero-emission vehicles, which will not only help clean the air and improve public health, but will also help create local jobs as the projects are implemented.

SB 1275 directs ARB to establish a suite of equity programs aimed at making clean cars and trucks accessible to low- and moderate-income Californians. These include electric vehicle carsharing programs in disadvantaged communities, financing options that would lower combined monthly car payments and fuel costs, and incentives for the replacement of gas-guzzling “clunkers” with new or used electric cars or vouchers for transit and car-sharing.