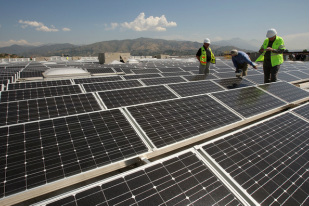 “In the midst of a crucial debate about the future of California climate policy, the Senate is taking a big step to fight both pollution and poverty using money paid by polluters,” said Greenlining Institute Environmental Equity Director Alvaro Sanchez. “This proposal means real help to low-income families and their neighborhoods — $1.2 billion worth.”

“The Senate’s proposal helps ensure that the state can implement critical programs and invest in innovative projects in communities overburdened by pollution and poverty” said SCOPE Research Director Laura Muraida.

Projects to be funded under the Senate proposal include home energy saving and solar power for low-income families, tree planting in urban neighborhoods, and vouchers to help owners of older, gas-guzzling vehicles to replace their “clunker” with a clean electric or plug-in hybrid car or truck. Advocates applauded the proposed allocation of $175 million to Transformative Climate Communities, an innovative proposal to “connect the dots” and fund coordinated efforts in a variety of program areas (such as energy efficiency, transportation, etc.) that will work together to bring real benefits to communities in need.

“These climate investments will bring needed relief to California communities suffering from smog and a lack of clean transportation choices,” said Bill Magavern, Policy Director for Coalition for Clean Air.

“We are hopeful about what the Senate has put forward and encourage the Assembly and governor to work with the Senate to make this happen,” said Asian Pacific Environmental Network Senior Strategist Parin Shah. “The next two weeks will tell us a lot about California’s climate future. Today’s move helps keep our on the path towards a cleaner, more equitable future for all our communities.”

Under AB 32 (Nuñez/Pavley), money raised by charging polluters for carbon permits under the state’s cap-and-trade system goes to the Greenhouse Gas Reduction Fund to pay for projects that further cut carbon emissions. A second law, SB 535 (De León) directs at least one quarter of these funds to projects benefiting highly polluted, economically disadvantaged communities, with at least 10 percent going to projects located directly within these communities.

The coalition does see some sections of the current language that need work, and looks forward to working with legislators to address those concerns.

“We are hopeful that the Senate, the Assembly, and the Governor take this opportunity to improve our climate while helping low-income families participate in the clean economy,” said Chelsea Tu, Staff Attorney for Public Advocates.

Last year, The Greenlining Institute collected 10 case studies that illustrate the impact of California’s climate investments. Stories of real Californians impacted by these clean energy policies, as well as background on the laws themselves, can be found at UpliftCA.org (English) and es.UpLiftCA.org (Spanish).