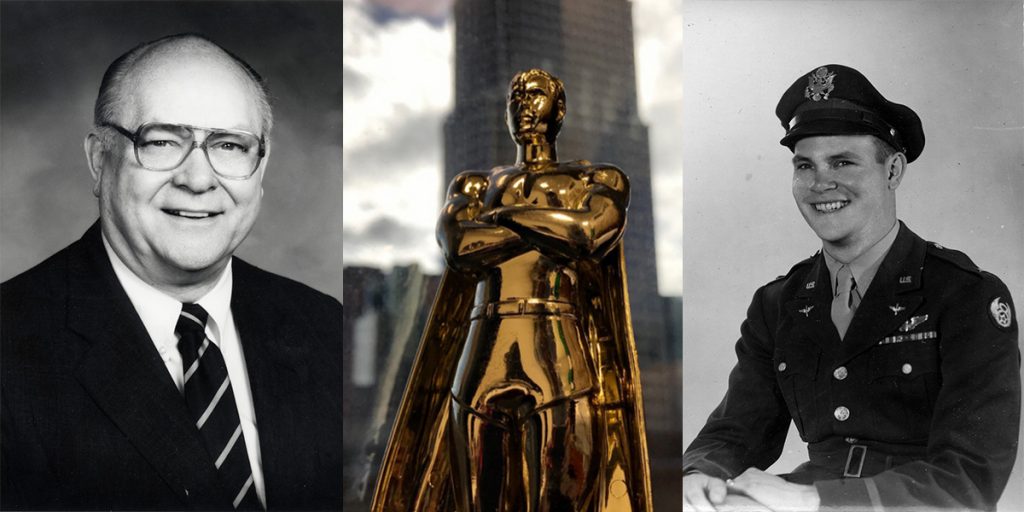 When Henry “Hank” Wedaa passed away last month, California lost a strong advocate for clean air and a pioneer of hydrogen fuel cell history. We’re saddened by his passing, and deeply honored to recognize Hank Wedaa posthumously as a Clean Air Hero.

“Courage, commitment, leadership, and wisdom. These,” said Coalition for Clean Air President & CEO Dr. Joseph K Lyou, “are the most prominent characteristics of the Honorable Hank Wedaa.” Throughout his 95 years, Wedaa embodied these values as he became a force for emissions reductions and clean air.

After serving in World War II, flying 30 missions over Northern Europe as a B-24 bombardier and aerial gunner, earning the Distinguished Flying Cross, and spending 20 years conducting research on military technology, Wedaa was elected to the Yorba Linda City Council. He served on the City Council for more than three decades, including five years as Mayor.

For seven of his years on the City Council, Wedaa served on the Governing Board of the South Coast Air Quality Management District. He was the Chair of the Governing Board for three years. His participation on the board marked a sea change for the organization. Prior to that point, “environmental advocates were ignored to the extent possible,” said Mark Abramowitz, former President of the California Hydrogen Business Council, the Coalition for Clean Air’s first paid staff member, and a longtime fighter for clean California air. “Most just tolerated me.” Abramowitz was shocked when Wedaa called to request a meeting, taking seriously the need for alternative energy sources.

During his tenure at the South Coast AQMD, Wedaa “began the process of getting our power plants to convert from fuel oil to natural gas,” said Abramowitz, “a stunning accomplishment in the face of a politically-connected industry that would rather go to court than control emissions…Hank also helped put together the world-renowned Technology Advancement Office at the South Coast Air Quality Management District. The TAO was the District’s tool to encourage development, commercialization and use of new technologies. It has played a role in the development of technologies now used all over the world, spurring many new industries, creating jobs and many tons of emission reductions.” Hank Wedaa was a strong advocate for clean air and a pioneer of hydrogen fuel cell history.

After leaving the Yorba Linda City Council and South Coast AQMD, Wedaa co-founded and presided over the California Hydrogen Business Council and served on the U.S. Department of Energy’s Hydrogen Technical Advisory Panel. Wedaa took seriously the threats posed by emissions from internal combustion gasoline engines and dirty power generation utilities, and advocated for the development and use of fuel cells as an alternative power source.

Wedaa’s outsized impact on California air quality has not gone unnoticed. He was awarded South Coast AQMD’s Leadership in Government Award in 2003, California’s Air Resources Board’s prestigious Haagen-Smit Clean Air Award in 2009, and in 2014 the Coalition for Clean Air presented him with a Lifetime Achievement Award. “Hank quite simply got out in front on fuel cell technology long before any of us completely recognized its full potential,” said Lyou.

It is difficult to overstate the impact of Wedaa’s leadership on clean energy and clean air, especially in the face of forces who would rather protect the status quo than our health and environment. “One thing that Hank always said was ‘nothing ventured, nothing gained,’” Abramowitz recalls. “I hope that the Coalition and all its members always remember those words in the fight for clean air.”

You are invited to attend a Celebration of Life Memorial Service for Hank Wedaa on Thursday, January 16, 2020 at 2 p.m.

Refreshments will be served. Please RSVP by Thursday, January 9, 2020 to: hankwedaa@gmail.com. Please include “Yes” and the number of persons attending in the subject line.