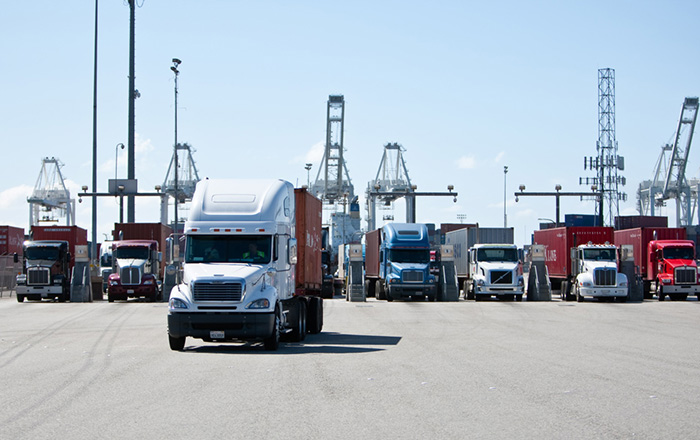 The Ports of Los Angeles and Long Beach have released their economic study to support the Truck Rate Plan that will impose a proposed rate structure to help accelerate the conversion of the San Pedro Bay truck fleet to cleaner, less-polluting models. In 2017, the Ports promised to create a Truck Rate Plan as part of its San Pedro Bay Ports Clean Air Action Plan – more than two years ago.

In their plan, the proposed rate is $10 per TEU (20’ equivalent unit or “box”), which, based upon 2018 “loaded” import numbers, would result in approximately $90 million earmarked for cleaner trucks. While seemingly a large sum of funds, $90 million is woefully inadequate to meet the needs of replacing a polluting heavy-duty truck fleet that services both ports every day. About 12,000 trucks need to be replaced. To get truck owners into a new alternative fuel truck, the ports need to provide approximately $100,000 in incentive funding per truck. Given the proposed truck rate, only about 900 diesel trucks could be replaced annually.

Approximately 80,000 of the largest heavy-duty diesel trucks need to be replaced in the South Coast Basin by 2023 to meet Clean Air Act legal requirements, reduce smog-causing NOx and improve public health by minimizing exposure to pollutants that cause respiratory, asthma and other health problems. About 15% (12k of the 80k) of the trucks that need to be replaced use the San Pedro Bay Ports.

Replacing 12,000 trucks would cost $1.2 billion or $400 million per year for three years. Unfortunately, $90 million dollars annually will not be enough to replace Port trucks quickly – trucks that are projected to be responsible for 20% of NOx in the South Coast Basin by 2023. To put it bluntly, the Ports are not doing enough to reduce heavy-duty truck pollution in the Basin.

To raise $400 million per year, the truck rate would need to be approximately $45 per TEU. Consider that the combined value of cargo going through the ports in 2018 was $491 billion. That means that $400 million to clean up all the necessary trucks would cost the ports .08% of their combined cargo value. Put another way, if the average consumer pays $70 per pair of athletic shoes that arrives through the ports, the increased cost of the shoes would be 6 cents, or .08 percent to pay for cleaner air for us all.

The economic public health cost of port truck pollution far outweighs the cost of replacing old dirty trucks with alternative fuel trucks. By establishing a low truck rate of only $10 per TEU, the ports continue to put freight industry profits ahead of the measures necessary to protect public health.

The Coalition for Clean Air urges the Ports to (1) set the truck rate at no less than $45 per TEU for at least the first three years of the program; (2) ensure that the rate payment will not be borne by truck drivers, who are least able to absorb this cost due to very limited profit margins; and (3) commit to re-evaluate the truck rate annually to guarantee the protection of public health, the attainment of state and federal air quality standards, and the fulfillment of the goal to transition all port trucks to be zero emission vehicles by 2035.