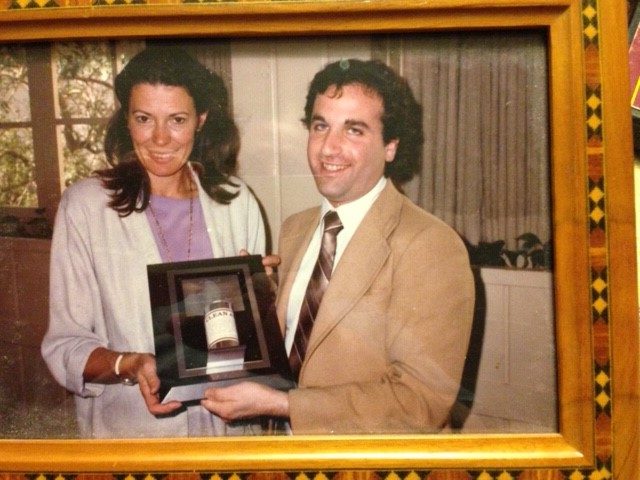 by Former CCA Executive Director and Board Member Mark Abramowitz

Above: Mark receives a California Air Quality Awards from Past Board President Sabrina Schiller

It was Lucille Van Ommering, a staff person from EPA Region 9. Lucille, who retired from the California Air Resources Board just a few years ago, became my secret “Deep Throat” in a call that changed the future of air quality in Los Angeles.

Lucille told me that EPA had approved the air quality plan for Los Angeles, and that there was less than a week for someone to challenge that approval in court. And unless the plan was challenged, it was “game over” for air quality in Los Angeles.

You see, the plan as designed projected improved air quality until the early 1990’s, after which growth would overtake that progress and air quality would continue to deteriorate. That was our blueprint for the future.

I immediately contacted my director at CBE, and needed an answer by the next day. The response was discouraging – the organization didn’t know how it might affect its reputation and didn’t want to proceed. I was, however, given permission to proceed on my own.

The other active environmental groups in the area also declined to join the lawsuit – Coalition for Clean Air (where I served on their board), Sierra Club, American Lung Association, etc. With no “reputation” to harm, I decided to jump in feet first.

I contacted the Center for Law in the Public Interest, where attorney Fred Woocher agreed to help me file the papers needed to challenge the air plan under the citizens suit provisions in the 1977 Clean Air Act. It was a simple one paragraph declaration of war: “I hereby challenge the approval ….”

As it did, I put together a legal team. I technically filed without an attorney – pro per – but my legal team agreed to advise me for the time being. The team was made up of Woocher, former CBE attorney Nick Arguimbau, and Loyola Law School professor Dan Selmi, who ultimately led the team, and did most of the work.

Not long after, a bombshell dropped – a 12 page list of virtually all the utilities in the U.S. was intervening on EPA’s side. <gulp!>. It was now Abramowitz versus the polluters.

I went back to the various environmental groups, and they were now willing to sign on as intervenors on my side (the Sierra Club doing so, as I later was told, to keep me from “getting too crazy”).

Meanwhile, press coverage was constant, with coverage coming from all over the world.

And with that attention was a glaring light being shone on an out-of-control public agency, the South Coast Air Quality Management Board.

There were legislative hearings on the failure of the agency, and bills introduced whose purpose was to prod the agency into doing its job as intended.

Limits were placed on the term of the pro-industry South Coast Air Quality Management District board chairman, tougher rule requirements were mandated, board members alternates were eliminated to increase accountability, and the agency’s executive director was “retired.”

Internally, the agency restructured itself. And among the new initiatives was the formation of a new “Technology Advancement Office,” a shining light that exists to this day. The TAO has funded and overseen the development, demonstration and commercialization of new technologies that have resulted in emission reductions not only in the region, but throughout the world.

On the state level, changes also happened in response to the legal pressure, culminating with adoption of the state’s first-ever zero emission vehicle mandate. The mandate, modified several times since, is responsible for increasing numbers of battery and fuel cell electric vehicles on the roads.

The case was a slam dunk. It was 1984, and the region had until 1987 to attain standards IF it had met certain requirements to get an extension last 1982, which it hadn’t. And not only did the plan not show attainment by 1987, it didn’t demonstrate attainment EVER!

And the agency response wasn’t due to an idle threat – disapproval of the plan could lead to the loss of many hundreds of millions of federal transportation dollars and restrictions on growth, and even put the federal government in charge of clean-up efforts.

Yes, it was better to fix the problem.

Several months after filing, I was approached by EPA to explore possible settlement of the lawsuit. We began discussions, and Lucille (!) was assigned to work with me on a possible new EPA program, called the “Reasonable Extra Efforts Program” or REEP. The name came from a “reasonable efforts” requirement in federal law.

We finally reached agreement on the program, though the final sticking point was EPA’s refusal to acknowledge oxides of nitrogen as a precursor to ozone – which all air pollution science said it was, and which forms the basis of most emission control efforts today. (The other sticking point was federally controlled sources, like ships.)

I gave in reluctantly, not wanting the perfect to be the enemy of the good.

And Lucille received an internal EPA award for her development of the REEP program.

And so our settlement was in place… or was it?

Several Congressmen in areas representing the auto industry, led by John “Dirty Air” Dingell as we called him balked at the settlement, saying that it was illegal. Technically, I guess it was, and these Congressmen were going to be the enemy of the good.

So … EPA reneged on its settlement agreement.

And the Ninth Circuit Court of Appeals scheduled our hearing.

Dan Selmi appeared before the panel of judges, and despite getting asked tough questions, when the decision came down, I won.

The plan was set aside, and the court told EPA to do its job, meaning “step in and prepare your plan for the region” as required under federal law.

In a case that some refer to as “Son of Abramowitz,” I filed a second lawsuit, this time while working at the Coalition for Clean Air, and under their name. The case was to get the court to order EPA to prepare its own plan for the region, as required under federal law.

This case was easily won, too, and EPA was forced to prepare its own plan for region, which was then equally attacked by industry and environmentalists, but was never implemented, in part due to the adoption of new amendments to the Clean Air Act in 1990.

Today our air is much cleaner than it was, and I owe that to the courageous action of an EPA employee making a call that could have cost her her job.

I’ve only recently been able to tell this story, in order to protect her. But now that the secret is out, we all owe a debt of gratitude to Lucille van Ommering. And I owe her special debt for the most exciting and gratifying period of my career.[Note from CCA: CCA will forever regret not being first in line to join Mark when he filed his lawsuit and when we did intervene it certainly wasn’t to keep him from “getting too crazy.” We are very proud to have learned our lesson and been lead plaintiff in the Son of Abramowitz lawsuit.]