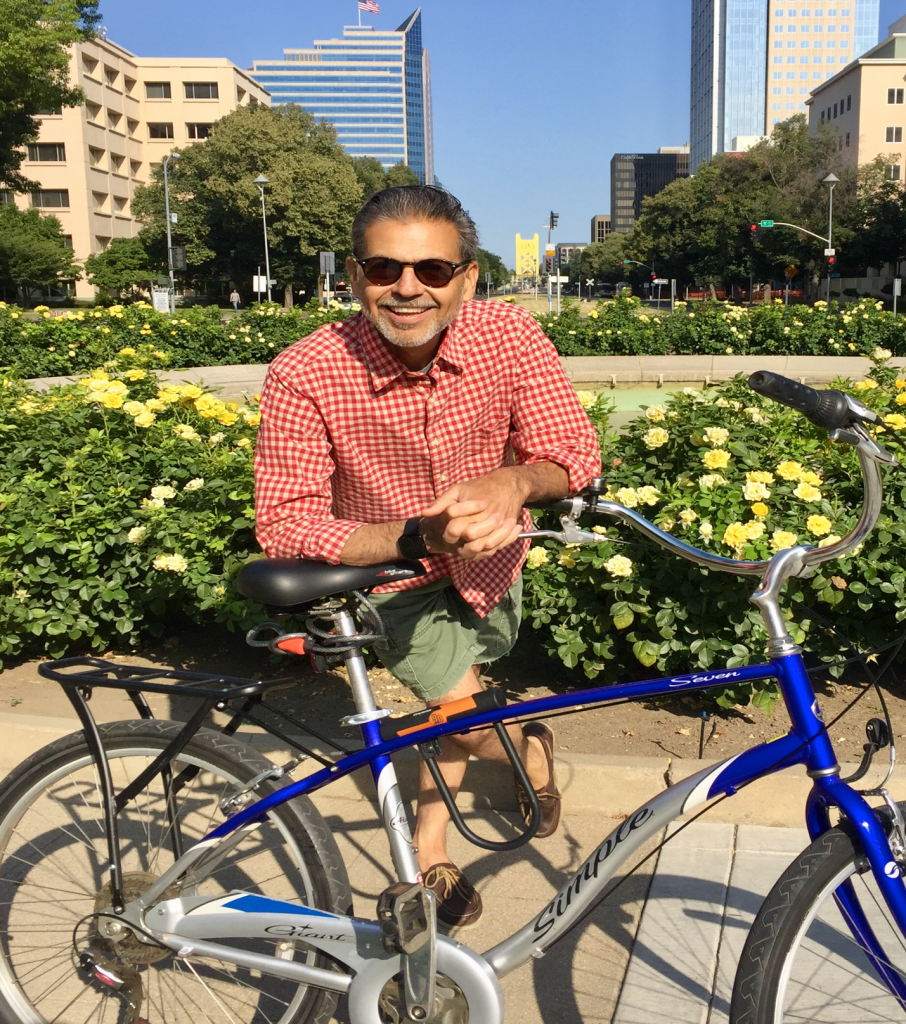 “Nothing compares to the simple pleasure of riding a bike. “
President John F. Kennedy

I love my bike.

It’s a late-blooming love and a bit surprising. I’ve had my bike for nearly 15 years and most of that time it sat in the garage collecting dust.

That all changed when I started with Coalition for Clean Air in its Sacramento office. No way could I continue driving to work. Carbon footprints are frowned upon around here. And I didn’t want to pay $100-plus per month for downtown parking.

There’s always the bus or light rail but no transfers are necessary when I’m pedaling.

Is there a downside? My bike helmet smashes my pompadour. That’s about it.

Convenience is just one of the benefits of riding my bike. It’s good for our air and climate.

According to the Union of Concerned Scientists, cars and trucks emit about one-fifth of all U.S. greenhouse gas emissions. Driving a compact car that gets 35 miles per gallon for 10 miles, five days per week puts .7 tons of carbon dioxide (CO2) in the air! Bigger cars belch more pollution.

My bike has no tailpipe! By riding my bike just two miles each day for a year instead of driving I can prevent 440 pounds of CO2 from entering the atmosphere. And when I’m on my seven-speed blue and silver cruiser I just love peddling past cars stuck in traffic! Then there are the health benefits.

A San Francisco Bay Area study found that increasing biking and walking from 4 to 24 minutes a day on average would reduce cardiovascular disease and diabetes by 14 percent and decrease greenhouse gas emissions by 14 percent.

As a type 2 diabetic, pedaling to and from work each day helps tamp down my blood sugar levels.

Bike-love is blossoming and has been for some time. No wonder, said one anonymous bike rider: “You can’t buy happiness but you can buy a bicycle and that’s pretty close.”

In 2014, USA Today reported that the number of people pedaling to work increased by 60 percent during the past decade. In May, nearly 100,000 Bay Area riders took to their bikes on the 24th Annual Ride Your Bike to Work Day, as did thousands more throughout the state.

Also in May, a new bike-sharing program was launched in Sacramento, West Sacramento and Davis. Three hundred electric “Jump Bikes” were deployed throughout the region and they’re so popular another 600 are on their way this summer.

Bike-sharing programs are popping up in Southern California, the Bay Area and across the country with more than 32,000 bikes nationwide.

With so many seeing their bikes as a valuable – if not essential – mode of transportation, it makes sense that our local, state and federal governments do more to make bike riding safe and accessible to all Californians, especially in low-income and disadvantaged communities.

For instance, the California Air Resources Board recognizes the environmental benefits of bike riding and has begun to fund electric-bike sharing programs in a few communities. That’s great! Let’s see more.

You don’t have to be a genius to figure out why you should ride a bike because one already has. “Life is like riding a bicycle,” said famous brainiac Albert Einstein. “In order to keep your balance you must keep moving.”

The bike-love bug has certainly bit me. I know this new love will surely be tested when Northern California’s cold and wet winter settles in. I guess time will tell if this is just a summer fling or the real deal. I’ll get back to you on that.